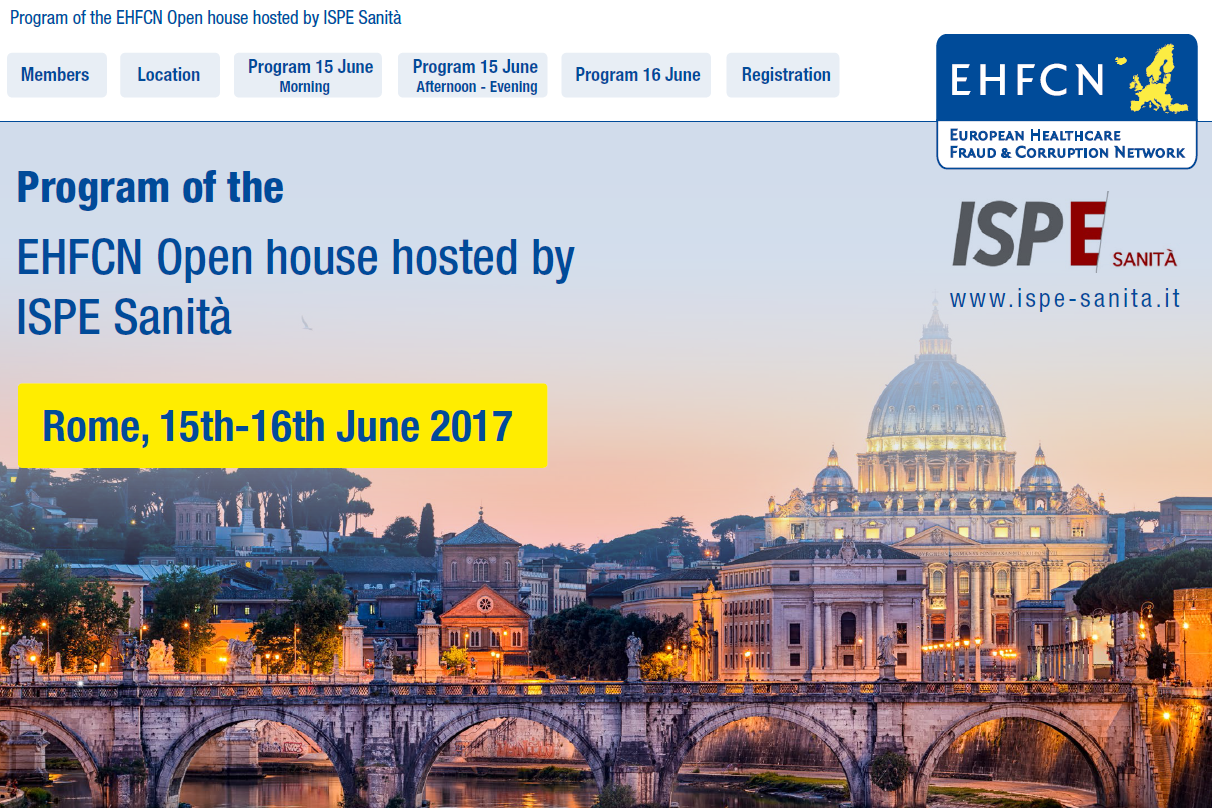 Healthcare typically accounts for around 9% of GDP

Rome, June 16th, 2017 – Healthcare corruption and fraud are serious and complex topics which, undoubtedly, need to be analysed from a transnational point of view. Today, for the first time in Italy, 50 delegates of 14 European Countries reunited in the International Conference organised by EHFCN – European Healthcare Fraud & Corruption Network (www.ehfcn.org).

Several representatives of anti-corruption institutions from Belgium, the Netherlands, Portugal, Slovenia, France, Lithuania and United Kingdom participated in the event. The discussion started with a video message of David Sassoli, Vice President of the European Parliament, followed by René Jansen, EHFCN President. Francesco Macchia, President of the Istituto per la Promozione dell’Etica in Sanità (ISPE-Sanità) represented Italy in the debate.

During the event, the book on “Healthcare Fraud, Corruption and Waste in Europe, National and Academic Perspectives”, collecting contributions and experiences from several countries on fraud, waste and abuse in healthcare, was presented. Within this volume, Italy – together with Belgium, France, the United Kingdom, Poland, Portugal, the Netherlands, Lithuania and Slovenia – published its “National Report on Corruption and Healthcare Fraud”, focussing on a phenomenon that, according to the analysis carried out by ISPE-Sanità, makes approximately 6 billion of public money disappear in Italy only.

Evidence from European countries’ National Reports shows that the most common types of fraud are the non-compliance with invoicing rules, as well as the invoicing of irregular or unperformed health services. For example, 4,819 episodes of fraud were reported to the health system by the competent authorities in the United Kingdom only within the period 2014-2015. This shows an average of 402 cases per month, where ‘fraud’ includes bribery, corruption and illegal economic crimes. In France, the national anti-fraud Directorate of CNAMTS (French national health insurance) has detected and stopped for an amount of 244,6 million euros in 2016 and about 231.5 million in 2015. In Belgium, the government health inspection authority – MEID – has identified 1,225,585 infringements in 2015.

René Jansen, President of EHFCN, highlighted that “it should be emphasised that the data included in Healthcare Fraud, Corruption and Waste in Europe is difficult to compare due to different assessment methods.” However, in order to align the analysis and control criteria for corruption at European level, EHFCN developed the ‘EHFCN Waste typology matrix’, an important tool for reporting on healthcare fraud, allowing for the use of common standards and which we wish to disseminate in the countries of the European Network.”

Francesco Macchia, President of Ispe-Sanità, pointed out that “an OECD Report recently highlighted that waste, inefficiency and corruption contribute to the dissipation of a fifth of the health systems resources. The EHFCN analysis presented today reveals that most of the European health systems are experiencing the spread of fraud, whereas in Italy the phenomenon of corruption has now evolved into a structural dimension. This is due to the different nature of services, mainly financed through public funding in Southern European countries and by insurance services in Northern Europe. Therefore, there appears to be an alignment between different crimes and different typologies of services. For example, accounting irregularities have been observed in many Nordic countries, followed by those cases involving fraud in procurement procedures and public procurement in the health sector, while episodes of corruption and abetting prevail in Southern Europe. In a context of growing European integration, the elaboration of strategies allowing for the comparison of national systems and experiences is key in order to provide solutions to defend the European healthcare system, accounting for about 9% of European countries’ GDP.”

The discussion highlighted common points and elements of difference, as well as opportunities for improvement and obstacles for the establishment of policies and shared operational tools with the aim of effectively countering the widespread phenomenon of corruption, fraud and waste in healthcare. Representatives from the 14 countries have recognised the strengths of anti-corruption and anti-fraud organisations – both national and non-governmental – as well as the acquired organisational capacity focused on controls and on the activities of anti-fraud units at various levels. Similarly, participants commented on the great ability to raise awareness and foster citizens’ support for anti-fraud action in healthcare.

However, common critical elements in combating corruption and healthcare fraud have been identified among the EHFCN countries. Firstly, the lack of anti-fraud and anti-corruption culture, followed by a certain complexity and uncertainty of anti-fraud and anti-corruption legislation. Furthermore, there is a lack of structural funding and human resources, an excessive dispersion of tasks among stakeholders and a need for a more timely and effective communication between these organisations. Furthermore, there is a lack of tools to analyse digital data and a lack of digitalised data in the decision-making process or in the supervisory phase. The nature of the DRG system can be a potential incentive for over-consumption in healthcare services.

Finally, the potential decrease of public and political support to the healthcare system is perceived as a common risk in all countries, which may slow down the necessary organisational, institutional or legislative reforms.

Paul Vincke, Managing Director of EHFCN, concluded the event by affirming that “raising citizens’ awareness, making information available and more comprehensive as well as improving transparency of healthcare services will strengthen the patient’s position as key stakeholders in the prevention of fraud, abuse and corruption.”

At the end of the meeting, the President of EHFCN mentioned that “EHFCN will continue to develop uniformed standards for reporting on healthcare fraud, enabling substantial comparisons and benchmarking among all organisations in the 14 countries involved. EHFCN is a facilitator encouraging the exchange of best practices with a view to identify fraudulent practices and patterns.”